Tools and equipment for making cider

How much does it cost to brew cider?

Prices change over time so I will not list the costs in dollars or pounds or euros, but instead, will try and show you the cost compared to the cost of a large glass of cider in a bar.
The absolute minimum you will need is

But here is a more realistic basic brewing setup

Optional but highly recommended extra is a hydrometer to check the strength of your cider. (cost 1 glass)

So as you can see for the cost of about 3 drinks you can start brewing your own cider. 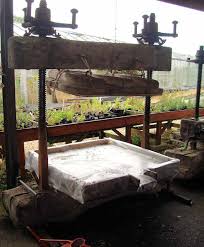 This seven foot tall Victorian apple press above is still in use after more than 150 years. Thankfully we can start much smaller than this, but there again, if you have a whole orchard…

Whatever the size of your crop, let us take a moment to go through the equipment in a little more detail.

Follow the link to find out about tools for pulping apples.

Follow the link to find out about fruit presses.

You need a lidded bucket. Remember that later on, things that have gone inside this bucket will be entering your body, so you need to make sure the bucket has no harmful chemicals that can leech into the cider. This is a serious point. Most buckets are used by builders and cleaners, so the manufacturers don’t mind using poisons in their manufacturing process. However, you need ‘food grade’ plastic, glass or wooden containers throughout your brewing process.

Even old whiskey casks fresh from the distillery can have some rather nasty molecules in them which may ruin your brew or just give you a serious headache.

The best way of ensuring this does not occur is to buy a proper brewers bucket.

The demijohn is a glass bottle holding a full gallon of liquid. As far as cider making equipment is concerned, a demijohn is a perfect container and well worth the expense.

Yeast floats in the air around us and if you just leave the apple juice out in the open there is a fair chance the right yeast will get in there and start turning it into cider without any further help on your part. However, there is also a good chance that a nasty yeast strain will make your cider undrinkable. So, to be sure we generally buy a packet of specially selected yeast, add this to the juice and then exclude all other yeasts using..

Airlocks allow excess gas to escape while stopping airborne yeast spores, bugs, flies, bacteria and other nasties from getting into the demijohn during secondary fermentation which will spoil your cider.

The most basic brewery airlocks work by having the excess gas go through a tube with water in it. Take a look at the diagram. A cork with a hole in it allows gas to rise up through the tube, and when the pressure is high enough a bubble escapes through the water and out into the air. For obvious reasons this design is commonly known as a bubbler airlock.

There is a another airlock currently on the market. It is usually called a ‘junior’ and works equally well at keeping the nasties out of your brew. I have used both and although they both work well, I prefer the bubbler, because you can more easily see when fermentation has stopped than you can with a junior airlock. However, having recently smashed a glass bubbler which was stuck in a cork bung, I would suggest that the plastic bubbler airlocks are safest and easiest to deal with.

The reason we can brew apples in the first place is because of the effects of yeast.

Yeast spores are everywhere. On every surface and floating in the air are millions upon millions of tiny yeast spores. Some scrumpy cider is even made without the brewer adding any yeast themselves to the apple juice. There is usually enough yeast on the surface of the apple skins to get the process started.

However, yeast is only one of a number of micro organisms that are everywhere, and some of them will totally ruin your cider.

For this reason we try to remove natural yeast from our equipment, thus giving the cider yeast the best chance to work alone and unhindered, turning the apple juice sugars into alcohol.

The standard cider making equipment for cleaning brewing equipment is sterilisation using sodium hyperchlorate. I personally find this leaves a tainted flavour so I prefer to use Potassium Metabisuphite (Campden Tablets) as a sterilising agent.

However, I recently ran out of Campden Tablets and so I popped down to the supermarket and bought Milton’s sterilizing tablets instead. These seem to do the job and are cheap and easy to obtain.

Some people dislike both of the above options and find other methods to keep equipment sterile. One is known as backslopping.

Moving cider from one vessel to a new one needs to be done a number of times during the brewing process. A siphon (a clear plastic tube) is easily the best way of doing it. Most homebrew suppliers sell a combination of a long flexible tube and a shorter ridgid tube that stands up in the demijohn. This ridgid bit often has a small cup at the bottom to stop you from siphoning up the lees (the dregs from the bottom of the demijohn) as you decant your cider.

Cider does not have to be kept in glass beer bottles, but for a beginner, they represent the easiest containers available. In order to put a lid on each bottle you need to invest in a crown corker or some plastic bottle tops designed for beer bottles.

However, pretty much any safe drinking container will do. I currently have a number of old 2 litre plastic cola bottles that are now acting as mini cider kegs. With their screw top lids they are really easy to deal with and easy to store without the worry of exploding glass in the understairs cupboard.